I'm a sucker for most of Athenae's Weekend Question Threads over at First Draft, and this weekend's question is no exception. Seems I've left many tidbits of my past lives over there in those threads, and here's another for you:

What a loaded question for me. Darn near any family gathering involving my grandparents has been fun. My parents used to throw some rip-roaring parties at their house where they'd serve fajitas - the meat of which Dad had had marinating all the day before - and, once they got hold of a Braun juicer, some killer lime margaritas. Just invite a bunch of scientists from the pharmacology and cell biology departments of Baylor labs & see what happens. A lot happened.

My wedding reception was a hell of a lot of fun. We got a band made up of guys from the American Legion Dan played in to provide the music, and they'd never played a Jewish wedding before. We supplied the music for the hora and they had no clue that the dance could go on for 30 minutes of more. They played the sheet music for ten minutes and stopped, and my family descended on the band and told them to keep it going. The guys shrugged and kept it going for 40 minutes more. They still talk about that wedding.

In recent times, some friends of ours hold house parties in which they send out invites titled "I Ain't Your Mama", followed by a bunch of enigmatic phrases which will only come to light if you "act right and bring something" and come to the party. Being a member of the Krewe du Vieux in New Orleans has been a blast, especially for the pre- and post-parade parties. We've got a pancake breakfast tradition we kick-started at our place Mardi Gras Day in which little slices of the party come to us - y'all come to Chez Liprap if you're in town at that time and need some food and a place to pee. Adrastos' Muses parties are a kick, too.

And I would be totally remiss if I didn't mention the best parties I've attended in recent years: the first Geek Dinner I attended (GD3) in which I met most of the New Orleans bloggers and some of the First Draft krewe for the first time, and the Rising Tide 2 pre-conference "meet and greet" at Buffa's Lounge.

There's been mucho naches for me at parties.

And I really want to spread it 'round in the next couple of weeks, so here's a heads-up on my second annual Rising Tide contest, in which, each day of the week before the conference (that's August 23 through August 27th this year), I ask a different trivia question, the answer of which could get you $5 off your conference fee from li'l ol' me. 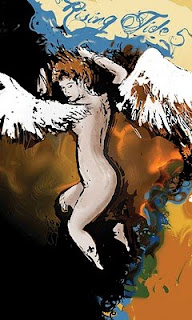 First off, the money for this is coming from me and only from me. Do not ask the Rising Tide website, blog, facebook, or Twitter accounts for sympathy if you have any beef with this little exercise - just bring it on over to me.

Ineligible participants are: the RT organizers, panelists, and speakers. Sorry, folks, c'est la contest.
So there you have it. Register now.

I was pleased to see that at least three more people registered and saved some Saints players' ACLs in the preseason game this past week. Let's keep the team in good health. Boost those numbers over at Rising Tide.
Posted by Leigh C. at 9:35 AM