This week marks the homestretch to an important anniversary that many of us who blog away like crazies at the keyboards have been prepping for in a number of ways: we get a venue, we get organized, we print up lotsa koozies, we steel our livers in anticipation of the beer...it's a fun yet stressful time. Which is probably one of the many reasons why I kick-started my Rising Tide trivia contest last year - I feel the great need to spread such joy.

So here goes, another year, another set of questions...and, after you've perused the contest rules and registered and/or donated to Rising Tide V, and then you're back here expecting a great deal of gravitas in the face of that other anniversary we here know so well. You're ready and waiting for any and all questions about levee protection, Cat 3-4-5 storms, politicians with egg on their faces, and stuff you never knew about the survivors of 8/29/2005. Never, in your wildest dreams, will you ever expect: 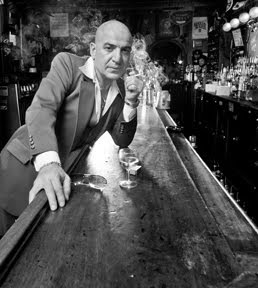 TELLY SAVALAS.
We have some problems in our house when it comes to home entertainment. We don't get cable or satellite - never have and probably never will, as we think paying for TV is kinda ridiculous. So we fill in the viewing of stuff we like with the help of Netflix and the internet (no, thank you, Internet) and occasional fixes at friends' and relatives' homes. The wrench thrown into the works of this system, however, is the dying of either our TV remote or the electric eye on our 2002-era TV, the death of which has nixed our viewing of DVDs for the time being unless we toss 'em into our laptop and watch.
What's left for us, then, is regular TV. And man, is it a hilarious cesspool.
I mean, what is there left when you've hooked up the converter box and WYES' weak signal only kinda sorta gets better when they're fundraising? Lots of reruns, that's what, and cheesy TV shows like The Guard, which Dan took one look at and dismissed with a "It's a cold Baywatch."
And, of course, the bad, baaaad movies.
I thought the days of UHF channels stringing a bunch of movies together for our late prime time pleasure under monikers such as "Sneak A Peek At A Geek Week" were done, but I was wrong. One twist on that tie-in seems to be taking one good-to-great actor and finding all the awful flicks he/she has done, then showing a week's worth of them. No one is immune - not Tommy Lee Jones, nor Jeff Bridges, and Bruce Willis...oh, the bad flicks that man has done. Another twist is an "era" of films, aka a Year in the Life of Crap Cinema. The only thing that even keeps us watching those is trying to see who will show up in such trashy gems....and last week, Telly Savalas, in all his cue ball glory, cropped up in the middle of one, Nu Yawk accent and all.
So, my question to you is: which movie of Savalas' was I watching last week? (Update, 5:00 PM: All right some hints: late-1960's flick on the This channel. Go forth and make your best guess...)
Gimme your answers below. The time on this question runs out at 10 AM tomorrow.
In the meantime, the Rising Tide V schedule is up and we have some changes to the program's public safety panel: Tulane criminologist Peter Scharf, who appears in Spike Lee's If God Is Willing & Da Creek Don't Rise will be moderating, and New Orleans police chief Ronal Serpas will be a panelist. Don't miss out.
Posted by Leigh C. at 7:36 AM