These days, my parents and my brother have settled into the state that calls itself "Native America" on its license plates. And though I've said far too many disparaging things about Oklahoma City in previous posts, fact of the matter is, there's always more to a place than meets the judgmental eye.

One thing that Oklahoma does do right is house a gorgeous collection of art in its state house. We went to see a new exhibit in its halls of some beautiful fiber art and were treated to this spectacle. 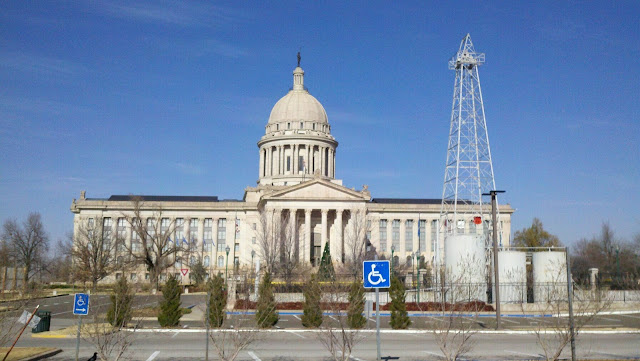 The derrick is symbolic these days, but the tanks in front of it aren't.

Seems that, although the state's Arts Council has this fantastic program, the building in which much of it is  housed has been deemed less worthy of the same care given to the exhibitions in its many floors. I think they want a bunch of private donors to do for the rest of the building what has been done for the capitol dome. 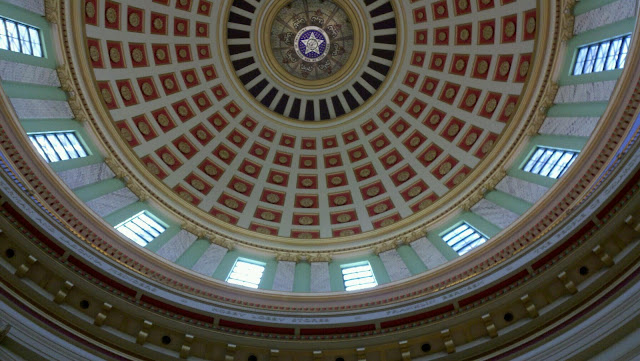 Among the names of those donors that ring the bottom edge of the capitol dome (look carefully) is one that's gained some notoriety locally for its policies on health care:

Craft store chain Hobby Lobby announced on Friday that it will ignore the ruling of U.S. courts and refuse to provide copay-free birth control access to its employees. It will do so despite whatever costs it may incur, even if they are higher than the cost of birth control itself.

Upon learning that Obamacare required employers and insurance companies to provide birth control with no cost to employees, Hobby Lobby sued, saying that, despite the secular nature of the business, the company’s owner’s religious objections should be taken into consideration. When a court denied that line of reasoning, Hobby Lobby took its grievances to the Supreme Court and asked for an injunction. The highest court in the land denied that request, telling Hobby Lobby that it must allow its employees access to birth control as it seeks further litigation.

But Hobby Lobby is saying no.

The store plans to ignore the provision anyway, opting to pay a fine instead of provide birth control, including the morning after pill commonly known as Plan B, which the owner feels goes against his personal religious values:

With Wednesday’s rejection of an emergency stay of that federal health care law by Supreme Court Justice Sonia Sotomayor, Hobby Lobby and sister company Mardel could be subject to fines of up to $1.3 million a day beginning Tuesday.

Honestly? I'd personally rather let a state house crumble than rely on such people to pony up for its renovations. The people who run that company aren't interested in the overall health and well-being of anyone except those who are just like themselves. It's not a principle I stand for at all.

Then again, I should talk, considering the state in which I live. We in Louisiana tend to be fond of saying "thank God for Mississippi" when it comes to bottom of the barrel status in matters such as education and health care.

What do you think they say here in Oklahoma?

I'm not sure when I got my first alarm clock - a glow-in-the-dark Miss Piggy one that had an annoying buzzing sound - but I know that even with the clock, my mother still needed to get in my room and prod me out of bed in the mornings. It looks like the little guy has inherited this propensity from me, complete with the "leave me alone" attitude. My mom was a saint, as is Dan, because I still have trouble getting up early.

I also have some trouble waking up to the fact that this kid is now ten years old. It's every parenting cliche that has run through my brain and then some over this fact, but it's only a few years from now when the real attitude will begin, when he will talk to us even less than he already does, when (hopefully) he may start caring more about food because (hopefully) he'll start growing even more like a weed than he already is, when he'll start being more interesting to/interested in the opposite sex - or maybe the same sex, when he'll chafe at the state of man-childness he'll be in and we'll be bearing the brunt...why, look at that, there's a glass-half-empty theme developing.

Perhaps it's my mother's propensity to be a champion worrier that is seriously kicking in now for me. My dad on the worrying Mom does over his and Mom's new puppies: "I had no idea that your mother worried this much. I guess I was working so much before, when she was raising you kids, that I didn't notice." (I kinda wish Dad had had this epiphany much, much earlier, but that's a whole 'nother few posts)

Thing is, I've always worried about the time that's coming up. I want to believe that we're going to have an easier time of it than most - but I firmly believe that kids are a crapshoot, which doesn't fit with optimism, by and large. Thank goodness for Dan and his sense of humor, which is annoying some of the time, but it gets me loosening up when I start thinking about the things the little guy does that drive me up the wall. Things could be worse, I guess; I could be dealing with this all by myself.

I love the little character like I've loved no one else in my life. It's amazing seeing him grow and change and try to grow and change with him. He's a bright, sweet person at his core, and at this stage of the game, he's not afraid to let it show. I'm just hoping, beneath all this worry, that he keeps those basics intact - and that we have the sense to recognize those things even when he's hidden them behind inevitable bad choices and growing pains.

Here's to my little angry bird. 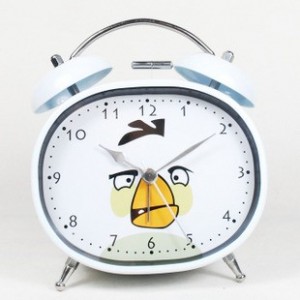 I can't say that I wasn't warned.

I knew it was coming from the moment my mother-in-law showed me the instrument in her living room and my then soon-to-be-husband mentioned bringing it to our home someday. That large piano with the defunct player mechanism on casters to make it easier to move around the living room whenever Dan's mother got the urge to rearrange the room's layout - which was more often than anyone would think. I looked at the piano, thought it was a nice (albeit heavy) idea, and put the instrument's eventual arrival at our house many, many years into the future.

...well, it was supposed to be. A few funny things happened on the way to our future with the player piano:
How much of a juggernaut is your average turn-of-the-20th-century player piano? We probably could've asked the movers to schlep our car up the stairs and gotten the same results - except that the piano actually made it halfway up the stairs before the movers gouged a hole in the wall, scraped the hell out of our baseboards, left sweaty handprints all over the rest of the place, then finally had to give up and haul the piano onto the porch, where it currently sits. 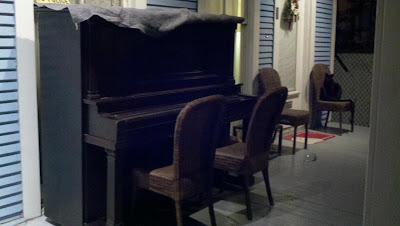 "So, I think we should enclose the porch!" Dan said, and I guffawed. That'd go over real well with our first floor tenants, who share the first floor porch.

Dan's reasoning: it's our house and we can do what we want, even if it inconveniences some of us for a partially working 800-pound instrument.

Dan has, in the meantime, measured our second floor balcony windows, assessed the likelihood of getting the piano up the rickety back stairs, gotten a line on actual piano movers that could use a crane to get it up to the second floor (but then we've got to get it through the windows), and concluded he wants to get it into a first floor tenant's place or into our first floor closet after we clear darned near everything out of it. This is a piano that has been in Dan's family for four generations. It came from its place of manufacture in Detroit to his great-grandparents' home in Hannibal, Missouri, with some stops in Peoria, Illinois, Portland, Oregon, and San Jose, California before coming to rest on our front porch. It is currently a temptation for our tenants and their friends (I can hear them tickling the ivories on the Colby even as I type this) and a small source of relief for the tenant who was standing in her kitchen when she heard the movers gouge a hole in our wall and thought the piano was going to come right through and kill her where she stood (she's relieved the piano's on the porch and not on her sternum).

He's not letting go of this instrument that easily.

As for the mystery piece of furniture I mentioned...well, check it out... 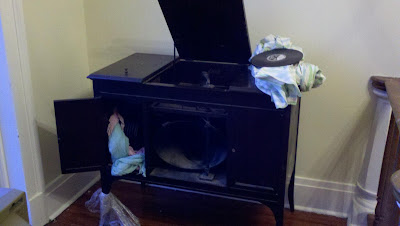 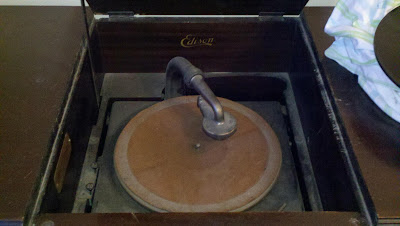 It's a 1922 Edison phonograph, a BC-34 model, made to play not the usual phonograph 78s, but special Edison "Diamond Discs" like the one below: 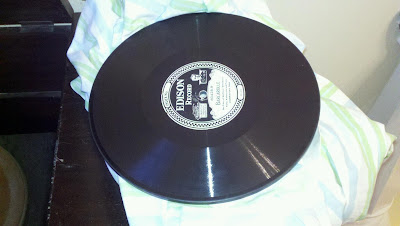 Yeah, it came with a bunch of the discs, too. Thanks to Twitter, I learned a great deal about the Diamond Discs (named for the diamond-tipped stylus that played them; they can only be played on Edison players and not on Victrolas). I also learned that Edison's taste in music left a lot to be desired - with the possible exception of some jazz that seemed to have been "sneak(ed) past the inventor as he napped." Looking through all the disc titles is a hoot; I'm especially fond of the title of #50686 - "Daddy You've Been A Mother to Me."

The best part? It's inside the house.

Now if anyone can get me a line on getting the "Baby Console" working, I'd greatly appreciate it.
Posted by Leigh C. at 10:06 PM 1 comments