As connections between cities and people go, Houston and I have not had the best relationship.

"What could make you dislike Houston so much?" my dad asked me recently? "It's not like you had any other city to compare it to. You were in Knoxville 'til you were four." Which is true.

But when you begin your school days in a rock bottom situation socially speaking, everywhere else looks good. When you are teased mercilessly every school day for 6-7 years, everyplace else is paradise. And when your parents seem to be deaf to your pleas and to what is happening (Mom told me later they went with the rock - private school - over the hard, public school place in my case, to which I say, "Thaaaanks."), your need to escape is honed to an exceedingly fine point. Granted, I was a pretty crappy, oversensitive kid, but something in me didn't feel like I needed to be reminded of how worthless I was nearly every day of the week. Something had to give someplace. Which is where the Astrodome - actually, the entire Astrodomain, circa the mid-1980s - comes in.

My first-ever major league baseball game was taken in under the Dome in my single-digit years. I came away with a nifty orange baseball cap and amazement that that many people could fit under one roof - including me! - and I didn't know any of them other than my dad (who brought me to the game), nor did they know me. It was probably one of the first inklings I got outside of TV and occasional visits to the beach that the world was far larger than I could even comprehend...and far more colorful. Garishly colorful, if you went by the multicolored seating on every level of the Astrodome. Downright celebratory if you checked out the six-shooting, cattle-roping, fireworks extravaganza that was the Dome's light-up scoreboard.

I ended up at the entire Dome complex - which included an AstroArena, an AstroHall, AstroWorld...yes, there was a theme there - at one time or another all through my childhood, whether it was going with my dad to the Boat Show, to the Rodeo on school trips and with my family each year, a USFL Houston Gamblers game, and one time, memorably, to the city Science & Engineering Fair in eighth grade. The AstroWorld and WaterWorld trips were the greatest, however, because I went traipsing around on the rides there - without my parents. Unleash a preteen kid like me and her few friends on an amusement park like that with the help of one friend's season pass and hefty discounts obtained from coupons on empty Coke cans and what do we do? Ride this four times in a row, because we got there when the park opened and there was no line, we were finally tall enough, and there were no adults or siblings to hold us back. My passport to paradise, courtesy of Judge Roy Hofheinz's kitschy vision.

Lots of good things come to an end, however. I got a little older and wasn't hankering to see live music at the Southern Star Amphitheater or in the Dome as much as I was as a preteen, nor was I going to the Rodeo. I got more interested in Houston's art museums and in the opposite sex...and then we moved away after my sophomore year of high school.

The Dome's fortunes seemed to go downhill around the same time. The scoreboard was ripped out and more seating put in its place as a condition of keeping the Oilers in town, but the team left for Tennessee anyhow a few years later. A convention center was built right in downtown Houston, drawing those types of events away from the Astrodomain, and then a ballpark was built downtown as well, causing the Astros to leave the Dome's orbit. AstroWorld and WaterWorld are memories now. The Texans currently play in a stadium that dwarfs the Dome, which I never thought would happen. Ever. All there is now is the shell that Hofheinz dubbed the eighth wonder of the world, closed to the public & waiting for sixteen years now for a new fate of any kind whatsoever, be it demolition or redevelopment.

When I heard that the Dome was going to be opened to the public for an hour on its 50th anniversary, something in me told me I had to be there. I dragged my son along to wait in one of the longest, friendliest lines I've ever been in, in which the people waiting to get in wore Astros & Oilers shirts and jerseys or an occasional "Save The Dome"-themed shirt while our kids all played together in the grass and on the pavement. We all talked about memorable events we'd seen, people we'd met, stuff we'd done in the place before 1999. I realized after the fact that in another setting, viewing the Dome as we did was akin to viewing a body laying in state, and there were over 20,000 of us who wanted to pay our respects. It was crazy. It was sad. It was a beautiful thing. 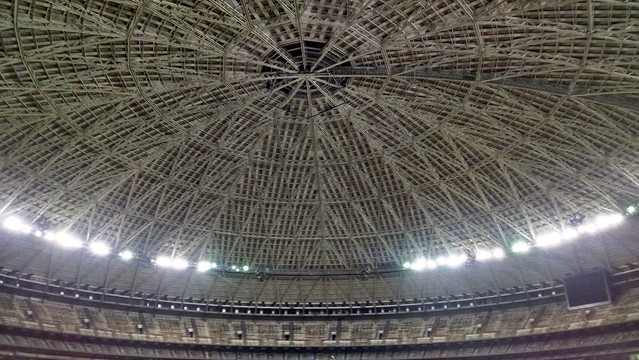 "The Astrodome seems plenty big enough to me," my son said on his first - and possibly last - look inside the place. "Why isn't it being used again?"

I had a hard time answering him. So many reasons why, yet there were none at all.
Posted by Leigh C. at 12:46 AM 0 comments