Although Houston itself has quite the deserved reputation of obliterating its historical spots in the name of progress, expansion, and strip malls (it gets exploited for a bit of satire on occasion), Texas does adore its history, especially when it has to do with its ten years of independent living as a republic. The Come And Take It Festival in Gonzales, Texas at the end of this month wouldn't exist without one man's stalling for time by drawing a proverbial line in the sand and kicking off the Texas Revolution as a result. It's an event celebrated by many who love the right to bear arms to utter distraction and commemorated by flags that bear the image of a certain contested cannon and those four fateful words.

My personal favorite take on the flag bears the image of the Astrodome instead of the cannon on it; it currently sits alongside the behemoth that is NPG (formerly Reliant) Stadium, stripped of its seats and serving as glorified storage. It was Judge Roy Hofheinz's vision of the future, and if this town plays its cards right, another judge could help deliver a different vision that keeps the Dome standing. Until then, the place my granddaddy helped develop and manufacture plexiglass roof panels for will sit and wait in its asphalt sea of parking for news of its ultimate fate.

Though both flags are pretty interesting ones to consider flying in Swanky Haciendaland, which does adore and approve of patriotic displays as long as they're only a certain height above the ground, I have checked the subdivision's by-laws and my neighbors' yards and found that, though U.S. and Texas flags abound, there are other types of flags here. One fella's got three flying from tree trunks in his yard: a stars and stripes, a USMC flag, and a POW-MIA flag. So…

When I thought the 'hood restrictions only allowed either the U.S. or Texas flags on the lawns, I recalled a New Orleans version of the stars and stripes and ordered a couple - one for football season, one for Carnival time.

Though we have a handyman who's mostly AWOL and our internet seems to be MIA, I grit my teeth and revel in the little things to keep from going completely berserk. My small triumph of the day is getting this baby up before the regular NFL season begins. Long may it wave. 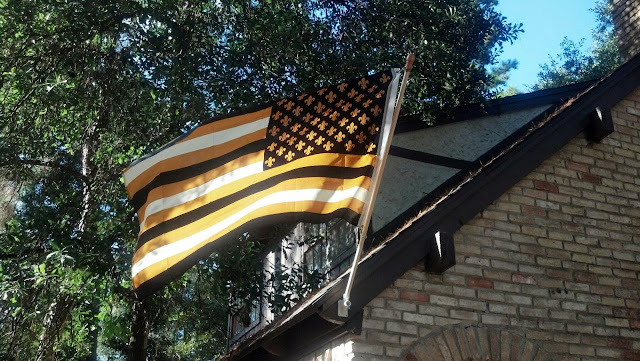 I had been reduced to this:

Sobbing at my kitchen table.

"I don't think I can make it through another week of this," I wailed to Dan, all the unsolved problems of our move looming like an insurmountable obstacle on my brain. Compared to what many people I know have gone through, my troubles are trivial, but they sit heavily on me, compounded by my having to go at them alone for the most part while my husband and son are at work and at school, respectively. So I must struggle away with problems like…

…applying to be a Texan.

It sounds cute. It isn't.

My car gets the privilege of becoming legal in this state before I do, where I must take it to an inspection station, then to a local tax assessor's office, and then I can get the okay from the state DMV for my Toyota to become a Registered Texan. I learned all of this when I tried and failed to get a Texas driver's license at the state Department of Public Safety, where I was turned away once for mistakenly bringing in a coffee ("No food or drink in the building. Please exit immediately." I'd've had a better reception if I'd brought uranium in) before being turned away for owning a Registered Louisianian car. Don't ask me why the state DMV doesn't handle the driver's licenses; I'm still trying to figure that one out. The only giggle I got out of the experience was seeing that a trampoline park is opening soon next door to the local DPS offices. I silently wished for many DPS employees to sustain some serious bounce-related injuries at a future trampoline shindig after the gatekeeper lady turned me away from the offices with a "good luck."

Years ago, Texas floated the idea of putting its official motto, "The Friendship State," on its license plates. The notion was roundly booed by native Texans, who derided it as being too wimpy for a state where even the garbage pickup campaign was badass. I'm inclined to think the new motto ought to be "You Should Have Been Born Here," or, after my experience of finally gaining membership in the Swanky Haciendaland community center, "The Nanny State."

Since we are lowly renters in this upscale burg, we needed signed, notarized permission from our landlady, a copy of our lease, and a form of ID with our current address on it to become members for a year, and then things got high tech. My fingerprint had to be scanned, then tested at the front door and the door of the health club to see if I could gain access. I was informed once my finger clicked open the front door that three cameras were mounted at the door, the footage was regularly checked, and if I was seen to let an unauthorized person(s) in, my scan would not allow me to gain access until I came in during office hours for a re-scan and, presumably, a reading of a deed-restricted Riot Act of sorts. It's looking like holding the little guy's bar mitzvah party at the place in nearly two years is a non-option.

I told Dan and our pal Justin about the process and got both barrels of kvetching about 21st century police states in the Information Age. Dan vowed he'd never set foot in the place to get his fingerprint scanned. I started thinking about the role IBM played in the Shoah, dismissed that worst-case scenario, and figured the best the community center could do was teach Augusta National and some old-line New Orleans Carnival krewes a thing or two about exclusivity in these modern times. First they will come for the lowly renters with scruffy yards living right at the bumps in the otherwise smooth subdivision lanes. You heard it here.

Talking about those two things is exhausting enough. I haven't even gotten to the fiasco thus far that is our attempts to get ComCast to supply us with WiFi. Nor have I kvetched sufficiently about our hard-to-get-in-the-house handyman Jesus…I can say if he were the one back in the beginning relied upon for any sort of first or second coming, Christianity would never have gotten off the ground.

All I can do today is wait. Wait for people to arrive within scheduled three-to-five-hour appointment windows to take one look at our house/our yard/our cable-internet lines and tell us why we cannot enjoy the services said people are supposed to provide. Wait for return phone calls. Wait for the second coming of Jesus the handyman. Hell, if someone would pay me to wait, it might be easier, but only a little.

It'd all still be kicking my sick and tired ass.

Gonna go back to the kitchen and cry some more. At least we have a new, working fridge, and a roof over our heads, and our health. Pass me the Kleenex to dry my eyes.