There are many, many people in this town who will not like the analogy I am going to put forth on the nature of the mayor's race and on how reluctant possible candidates are to even dip their toes into the brackish waters of a possible campaign here. But hey, since I am a fan, and have been since '86, it's my blog and I'm gonna do what I want...

...even if it means putting the notion out there that this town's nonstarting mayoral race is akin to the '62 Mets 120-game losing season. 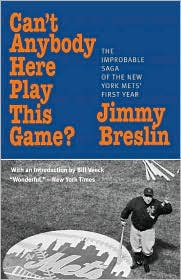 Where's Casey Stengel when you need him most?
I mean, think about this. God knows we all need some good, solid laughs, because things have been hanging lately...but we are getting short on that kind of thing. The absurdity has reached a fever pitch, to the point where any attempt at prediction and handicapping gets blown right off the shores and into the gulf.

Hell, I sincerely thought yesterday that Jim Letten was calling a press conference simply to tell New Orleanians he was not running for mayor instead of imparting the news that he was not going to investigate recent allegations of wrongdoing in the OIG. The mainstream media seems to be studiously ignoring the one candidate that would be damned good, even when a shootout happens right in front of his campaign headquarters. Makes me want to bring back Casey and have him point out the candidates for the media outlets just as he imparted some essential information to his amazing Mets at a practice once: "Them are the bases." Attention, TV news and the Times-Picayune: "Perry is a candidate."

Of course, people have floated the idea that the entire citizenry declare its candidacy for mayor, but I'm now thinking that a couple of the best candidates would actually be some people who have already passed on, with one of them leaving a mannequin of himself in his wake. Who better than the Emperor of the World and the Empress of the Universe for this here office? It'll at least bring back the VOTE K-DOE VOTE! slogan. We need some of those.

ANYway, getting back to sports, many people would say that baseball isn't even the right kind of game to liken to anything that goes on in this football town, forget conjuring up some team from up north that got its last World Series win 23 years ago with a lineup whose behavior would have shamed the depraved on Bourbon Street. Let's bring this back to the Saints! Now there's an analogy for ya!

All right. Here we go.

If we can line everybody up who's even thinking about the halls of City Hall and get them to do this:

...then I think we're gonna have one hell of a political season on our hands.

(thanks to dat wacky Cajun Boy for the Breesus stuff)

Update, 4:35 PM: Speaking of mayors, get your best digs in at the expense of our lame duck, Hizzoner the Walking Id, in Humid City's first-ever contest. The winner will receive a free LiveNation Club Passport. Dazzle me and the HC crew with your mayoral humor.
Posted by Leigh C. at 10:05 AM

It's Perry's own fault that the MSM ignores him. His campaign mostly exists on the tweeter tube and thereon he's always telling us about his out of town trips. Hopeless.

James is a very nice guy but he needs to log off and hit the streets.

Then Stengel needs to talk to him. "Them are the media."

Perry is "hitting the streets" The streets of D.C. of New York, of San Francisco...

It's true. I fear we will soon need to set up a "Where's Bobby?"-like map for the man. If it is all in the name of fundraising and he does reach office, then we may not see him again for at least another year.