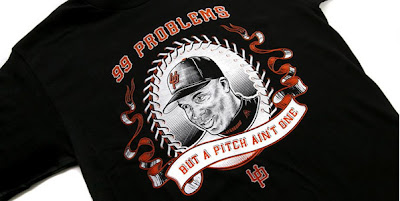 The tee used to be made by Upper Playground, but I now find I am coveting their Dr. K shirt.
The t-shirt pictured above has been burned into my brain since I saw it here, and my first impulse on seeing it was to send one to this man, who has put the Bonds case in the context of what was allowed under the Patriot Act and how no Bush & Cheney in office anymore is lessening its effects to the extent that Bonds will benefit. Throw in the racial politics of the accusations against Bonds vs the accusations against former single-season home run king Mark McGwire, the laxity of baseball's steroid testing policies, and the hole Bonds dug for himself in being surly to the press, the fans, and to his teammates unless they were deferential to him, and yeah, he seems to be too easy a target.

I picked up a fascinating book I procured a while back, however, known as Game of Shadows, and the story it digs into is that Bonds was one of the biggest pieces of bait used to bring down the Bay Area Lab Co-Operative, or BALCO, run by a clever, big-mouthed huckster named Victor Conte who had some big connections with those who created steroids that couldn't be detected through testing (the infamous "Clear" was so named because of that) and distributed the drugs to Olympic athletes, among them runner Marion Jones. The book got the authors involved in hot water as well when they were called before a grand jury and were sentenced with up to 18 months in federal prison when they wouldn't reveal their sources.

What the book helps clarify, however, is the extent to which Bonds made the fateful decisions that led him to be sitting in front of a grand jury - how motivated he was by his need to be the greatest, and how seeing the media fawning over McGwire during his home run chase in 1998 got him thinking about remaking himself and getting the spotlight back. Having high batting averages, making the All-Star team repeatedly, and hitting close to 40 homers in a season wasn't enough. If Bonds couldn't beat McGwire and the media into checking out his MVP award, he was going to go to the same sort of lengths he believed McGwire had been going to to remake himself and let his bat do the talking....which it did, breaking the record of 70 made by McGwire and putting Bonds on the path to besting Hank Aaron's career home run record.

It's a fascinating book, and I recommend it quite highly, especially now that the baseball season is winding down and football is tuning up....which leads us to...

Once again, check the rules, folks, and don't bother to answer unless you have registered and/or donated at least $10 to Rising Tide.

Which nationally-known athlete put BALCO on the map for other athletes?

Answer coming tomorrow. 'Til then, leave your comment.
Posted by Leigh C. at 10:50 AM

I'm not eligible and the contest is over, but just for the hell of it...