It's the little things that get to you sometimes

Like when cobblestone streets are repaired with patches of scored asphalt: 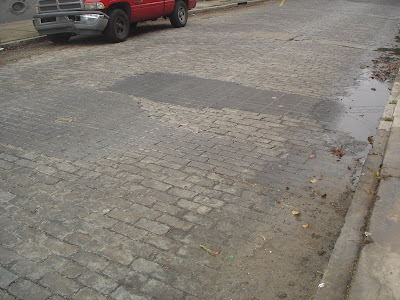 ...or it takes a while for the Sewerage and Water Board to get around to replacing the covers on the water meters, leaving open holes nearly two feet deep in the sidewalk: 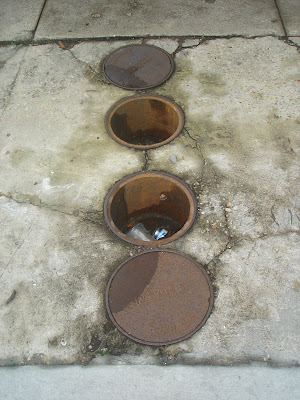 Oh, sure, this recovery business is gonna take a while, but isn't it already December 2008?: 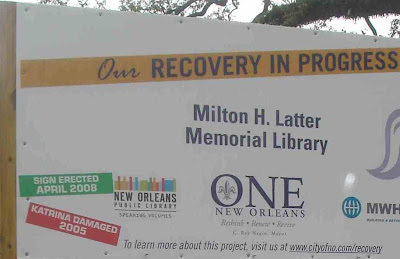 Hmmm...aren't there any funds for such basic infrastructure repairs?

Unfortunately, there is no more money in the 2008 budget to make streetlight repairs for the rest of this year, and the 2009 budget that was passed includes only the smallest amount for repairs in 2009, despite Council Member Midura’s efforts to get this infrastructure fund properly funded at the budget meeting.

It is possible your lights are likely to remain out for a while. We will continue our best efforts to provide a remedy to this situation.

More on the budget shortfalls from E here.

An examination of the Walking Id's proposed 2009 budget is here.

What Cliff thinks we oughta do to fill the budget shortfall is here.

We have 75 million dollars in the recovery budget to buy up half of Mid City for a new hospital complex that still don't have the money to build....Would it be legal to take some of that 75 million and put into the regular city budget to make up the shortfall? We should take all of it. Councilwoman Clarkson keeps assuring everybody that the disaster loans that have been the way of balancing the budget will be forgiven as the reason we won't be in crisis for the 2010 budget. When that day comes we can use that revenue to replace the Mid City money if needed. I honestly don't think the federal government is going to give us the money to make this plan happen anyway. We ought to just take what we have now and scale back the plan to fit what we can afford. We shouldn't be holding the money we do have hostage for the state, the federal government and LSU if they can't deliver on their part of the funding.

Would it be possible to move this money or is this another case where guidelines and the city charter give our leaders an excuse to not think outside the box?

ANYway, since we ain't got the dough to do much...

Just deck that caution barrel with some candy canes and boughs of faux holly! 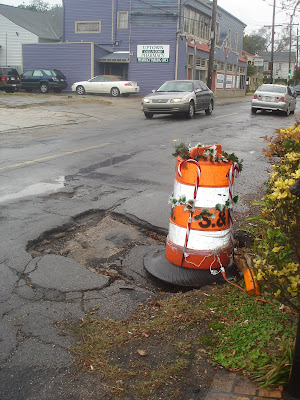 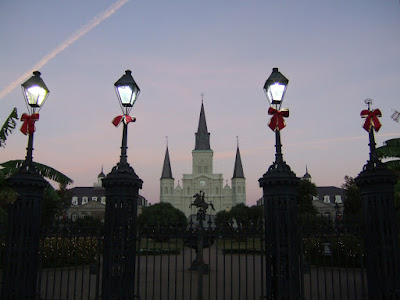 We can dress up Jackson Square, sure!

I love the decorated caution barrel. It's those sorts of things that keep me sane.

You know, I hate it that you are still dealing with these things, but that holly-decorated construction barrel somehow gives me hope. I'd hate to see New Orleaneans ever lose their superb sense of humor and general joie de vie.

Oh, yeah, I know the caution barrel is a hoot. The candy canes are even wired to light up, which helps with the whole safety thing at night...and I know the impulse to keep a sense of humor about quite well, which is one of the reasons why I think so many of the NOLA blogpocheh let off some steam with things like the Hostilidays YouTube Wars...it's just...this is such BASIC stuff that isn't getting done due to greed somewhere in the system.

What's up Leigh,
There will be no running of mayor for me because no sane person will want that job.

FEMA just said today they are not giving more than the 150 million. I think it's time to spend that money.