The last time I recall seeing my granddaddy, it was my brother's college graduation, and his dementia was only apparent when I showed him pictures of his great-grandson, who couldn't make it to the event. "And who is that?" he politely asked me in the student center, and it hit me that, despite the overall happiness of the occasion, I had to momentarily face a reality my step-grandmother was valiantly dealing with each day - and I was ready to buckle under that moment right then and there. It would have crushed me if I hadn't done what we in my family tend to be too good at doing: I fast put it out of my mind and focused more on his merely being there and the miracle of his reaching the season of his next-to-youngest grandchild's commencement.

I would have taken in far, far more if I'd have known I wouldn't see him again.

How do I prefer to remember my granddaddy? Well, I'd known him since a little after my birth - the tall man who would fondly recall when I got just tall enough that he could place his hand on my head and simply turn me to where I needed to go. The man who would bring me to visit his aunt Ruth, a bright, happy redhead who lived at the top of a small mountain on Little Switzerland Road off the Chapman Highway, driving his huge blue Caprice up the frighteningly winding one lane road and honking the whole way to better warn those who might be driving down. He had faith in the power of technology - not to mention some good luck on his side, as we never encountered any cars going the opposite direction on Little Switzerland that I remember. Even if we had, driving in an early-70's Detroit heavyweight with extra former-pace-car horsepower at a low speed probably wouldn't make much of a difference if we did hit anything head-on.

He liked where technology was going, jumping into mastering personal computers just as much for the joy of experiencing them as well as the fact that, in his fifties, he was starting to get shaky hands and writing out what he had to say via keyboards was far easier. He adopted email communications pretty early, fell in love with playing with flight simulators, and got a kick out of seeing what the internet could provide on occasion. His first technological love, however, remained airplanes...he couldn't become a pilot, so he went for the next best thing during World War II and became an airplane mechanic, stuffing his brain with so much knowledge of how they worked that it got him into trouble when he got into University of Tennessee and began engineering courses. A report card from his freshman year that popped up amid family photos passed around during a reunion occasion showed that he had a series of Ds and Fs.

"I'd just come out of the army and thought I knew it all," he said in a manner tinged with a little humor.

He turned it around really quick, eventually becoming the chief engineer of the Rohm & Haas plant in Knoxville. It gave him license to do the things he loved: getting a pilot's license and going in on maintaining a Cessna with a group of like-minded friends, singing in a barbershop quartet, and doing some things that I'm sure would have made my grandmother tear her hair out if she hadn't been so concerned about her appearance.

One afternoon, my grandparents, in town for a visit, came to pick me up from high school in Houston. Before I came out of the building at the end of the day, a sophomore came out to the student parking lot early, got in his car, and turned on the stereo. It instantly had all the other cars in the parking lot literally jumping a little on the pavement, and Granddaddy was intrigued.

"I'm gonna go talk to him," he said to Grandmother.
"Oh, no you won't!" she said, a tad embarrassed and very focused on watching for me.
"But...I just want to ask him how he managed to turn the entire car into a speaker."

When a friend of mine in college needed advice on how to make electromagnets for an art project, the first person I thought to call was my granddaddy. My friend talked to "Mr. Nichols" for quite a while and handed me back the phone, jazzed by the possibilities of hooking up an electromagnet to a car battery, or plugging it into the wall to see what would happen. Amused and a little horrified (I knew my friend and knew he would likely try those things), I got back on the phone.

"Granddaddy, what did you tell him?"

"Nothing I hadn't already tried before," he said cheerily. "Just like opening an umbrella and jumping off a pile in the hayloft - everyone should try these things once."

I learned later that he'd plugged an electromagnet into the wall of the house just to see everything momentarily jump three feet in the air before all the fuses blew. And yes, he'd tried the Mary Poppins umbrella bit as a youngster, too.

I could go on and on, and with many tales of my granddaddy that weren't exclusively mine. It seemed, though, that from what I'd heard, he carried the same demeanor he'd always had throughout his alert days into his dementia days. It helped that he had a loving woman in my step-grandmother caring for him.

He died peacefully yesterday morning, a son of Knoxville, Tennessee. A part of its history, born prematurely in 1924, so small he'd had to be incubated with warm bricks. He grew to be the tallest of his brothers and sisters, always curious and full of life. 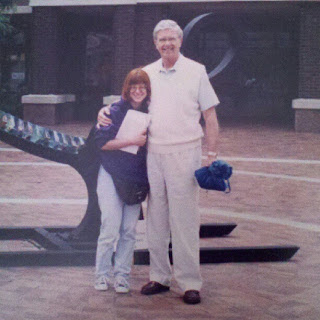 He sounds like a wonderful man who lived life to the fullest. May he rest in peace.

Your grandfather sounds like a beautiful man. I know it was difficult to lose him to dementia before his time. My condolences to your family.

..and I tried the umbrella trick too but because I was imitating the Penguin from the Batman TV show.