Via Suspect Device came this link to these photos, which are indeed horrifying and heartbreaking beyond rage, beyond grief, almost beyond words. But this one jumped out at me right off: 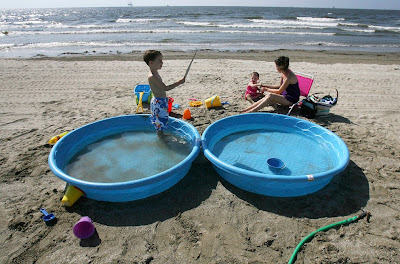 It's on Grand Isle, the beaches of which have been closed due to the oil inundating its shores. This family is at one of those beaches, surrounded by water - and they can't go in.

My son has been asking me about certain plot points in the production of Geauxjira he viewed with me shortly after I first posted it on this blog....it wasn't enough that he kept humming the theme music for days after he'd watched the homemade flick. His inquiring mind wants to know.

"Mom, why was Geauxjira a giant crawfish?"

"He took that shape, honey."

"Is it because crawfish are dying in the Gulf?"

"Actually, no, the crawfish haven't been affected yet. It's mostly the shrimp, the oysters, and the fish in the Gulf so far."

"Why was there even a Geauxjira, Mom?"

"It was created by the oil blowout. It's a creature that's supposed to remind us it's not nice to mess with Mother Nature."

"Because sometimes you try to reason with something, some entity, some creature, some organization, that's hurting other people and destroying stuff, and it becomes clear that the thing you're trying to reason with is acting beyond reason. Then, if you still haven't figured out what's motivating its actions, there's no other option but to kill it."

Got to admit - explaining a movie is fairly simple.

Explaining to our children why we can no longer swim in the Gulf, though? Not as easy, but it will have to be done.
Posted by Leigh C. at 5:17 PM

No doubt Geauxjira is a fearsome creature and a supercrawfish, but normal crawfish live in the freshwater swamp and freshwater ponds like rice fields. They are in no danger from the BP oil spill.

I've been thinking all day about the conversation you had with boy, and smiling.