I get a call from Senator "Diaper Dave" Vitter. And my first impulse is to hang up on the schmuck.

BUT I listened, just for the hell of it, and realized the man had just given the greater New Orleans area a prime opportunity to ask him ANYTHING. Anything at all. For only two hours. Right then and there in an over-the-phone town hall meeting. Press "0" on the keypad and you could ask the man a question. All he asked of you was to have you say yes or no to a small survey he was conducting concerning a bill he's trying to get passed that would reinsert a provision that the state shoulder less of the $5.8 billion that would be allocated towards 100-year flood protection in New Orleans.

I kid you not.

Granted, I was called and invited to participate at the beginning of hour two, but still...

What follows is a whole lotta live tweeting through the Twitter service (aka, the Tweeter Tube)that I did there to see who else was possibly connected to the call, or, if they weren't connected, to see who wanted to ask Diaper Dave something, and I would try to get the question in. Whether or not he'd answer it was another story.

Anybody else participating in an over-the-phone town hall meeting with David Vitter about the levees? Anybody want me to ask him anything?

This is going on RIGHT NOW, so get your questions in to me now.

Aside from chrisjohnston @liprap I didn't know he did those!

http://www.vitter.senate.gov/ is another way to go. Next question is about the insurance premiums - will that be checked?

Ooh, since he lives south of I-10 in Metry, he feels that pain, too.

A woman in NOLA: What message are young women supposed to get when young women hear about you doing an illegal act and hiring prostitutes? The answer to this one from him is the same ol' same ol'. It's in the past, don't dwell on it, get away from me, woman, next question...

Why is Congress spending loads o' dough on a new VA hospital when the old one was only damaged on two floors? Give me in the info, Dave sez

Hasn't Vitter ever been to the Netherlands?

Give land in Pearl River that has been handed over to Road Home to low-income families! says a caller

Why can't veterans use ANY hospital? Why does it have to be the VA? asks a caller.

Aside from NOLAnotes : A recorded Vitter just called my house. I cursed it out then hung up. Ah, release of stress. Wonder if he'll call back so I can scream more.

Aside from me @chrisjohnston : He called me up out of the blue. Seriously.

Trailer problems are being brought to Dave. Folks in Kenner are having FEMA tsuris...

Ohhh, a survey question: Do you favor legislation that would reduce the state's cost share on 100-year levee protection?

Aside from me @NOLAnotes : Too bad. He actually IS fielding questions.

Recovery of NO East - why aren't the people's needs there being addressed? Huh, Dave?

Dave relies on Greg Rigamer for stats. Maybe we need to call on him for RT III.

17th St Canal leak concern from a citizen - AND bring the troops home from Iraq, please.

Vitter is doing some CYA of the AC o' E. And he favors a gradual pullout from Iraq. Start your innuendo jokes now.

Aside from chrisjohnston @liprap At great risk of upsetting people, New Orleans East for a variety of geological reasons should probably not be rebuilt

How to help the soldiers caught up in the subprime mortgage crisis, Dave? Voted against the bill (to help with this) because I thought it bailed the banks out (he said).

SBA loans - will they be forgiven? Workin' on it, Dave says.

Aside from NOLAnotes @chrisjohnston That may be But then the East should never have been developed. Are they to be bought out at a true fair price? Won't happen

Aside from NOLAnotes @liprap Gotta stop reading your twits. Just upsetting me more.

Aside from caderoux @chrisjohnston No real geographic difference between parts of Kenner and the East. Wetlands, drained and filled, lake and spillway.

Oooh, $5.8 billion will go to strengthening the levees, but, should the state shoulder more of the costs? House cut out the lower cost share

House also cut out compensation for businesses relocating from the MRGO and other flooded areas. Vitty wants to put that back.

Aside from NOLAnotes @chrisjohnston Seriously? You aren't talking about Grand Isle or the Rigolets. The East was sold as prime real estate that was the new burb.

Aside from NOLAnotes @chrisjohnston It was never discussed that the East was "geographically deficient" UNTIL Katrina.

The event has ended. @dsbnola I did ask about this http://tinyurl.com/5vf6md

Aside from charlotteAsh @liprap upset at Vitter = negative energy expended that can be redirected positively anywhere else.

Aside from me @charlotteAsh : I do agree....However, I couldn't pass this up. I just wish there had been more notice...but then I think he'd get folks asking about his peccadilloes.

My apologies to everyone on the Tweeter Tube for my bazillion tweets. If it made you sick, send the bill to Vitter. 8-(
Update: Speaking of Twitter, if, as a frequent tweeter, you've gotten that "over capacity" graphic from the service one too many times, this one from Chris Johnston is for you: 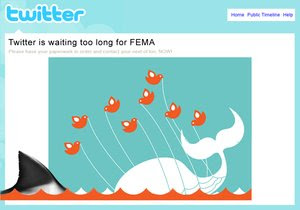 Thanks, Leigh. I'm sorry I missed the live Tweeting, but thanks so much for taking the time to do that. Extremely interesting, our very own peanut gallery (Cade & the Fountaineer) notwithstanding. ;)

Too bad was was pissed when Vitty called. It was probably to get me to join in. A lesson on listening and not cursing. Loved the live tweets.

Unfortunately I was napping with teh kittehs during your live talk with Vitty Cent.

Query, why is he doing this? Is he worried about his re-election in four years?

The frequent advertisement of his phone number and his website during the whole thing, the whole effort he made to go through this makes me think that he does want to do something to make himself more accessible and, yes, garner more votes for his reelection in the future. Of course, that depends on if he keeps this up.

This will also all fall flat if his office can't follow through on his promises to help with serious FEMA trailer, Road Home, insurance, and other problems these people came to him with. Though I do think a good number of the people who had questions for him realized he wasn't Vito Corleone, these are pretty desperate times for a lot of people here.

Somehow, Vitty has my work number. So imagine my surprise when I walked into my office this morning and had a voicemail from Diaperboy hisself waiting for me.

This only makes me happier that we have no home land line. Props to Vitty for public inclusion, however. So, thanks, Liprap, for taking one for NOLA!

What exactly came of this townhall?