I have become Li'l Miz Tour Guide for my best friend from high school this week.
It all began with a jaunt to JazzFest on Saturday afternoon. We managed to park the car in the yard of a friend's house and walked over to the Fair Grounds. My friend and her husband were actually a tad overdressed for the Fest: both of 'em were wearing pants, and the hubby had his wingtips on, so it was interesting to see him maneuver his way through the muck. They got in some dancing at the Economy Hall tent, courtesy of my Deputy Tour Guide, Dan (y'all know where I was...), and then we all decamped to John Besh's brassiere...uhhh, brasserie, Luke, for dinner (sorry, can't help it - it was listed as a brassiere for ages in the Gambit when they were hiring, and it was only corrected in the final weeks of the ad's run).
The next day, after I taught religious school (Overheard by the kids in my class: "Which one dispenses the hot water?", from a fellow trying to work a sink, and "Oh, no, I have such trouble reading those clocks!!!", from a girl who asked the time and was directed to the analog clock right up there on the wall. I guess she was missing her iPhone or some such thing, but still...), I headed out to the Fest with just me and my friend. The little guy opted out, but Dan kindly offered to drop us off at the Fest and had to repeatedly explain to our son that no, he was not attending the Fest, he was only along for the ride to drop us off and he was not coming with us. I'm so happy to learn that I am not the only one with a slight spoilsport for a child, but still, when you are having more fun than your kid, it makes you wonder which genes have skipped a generation... 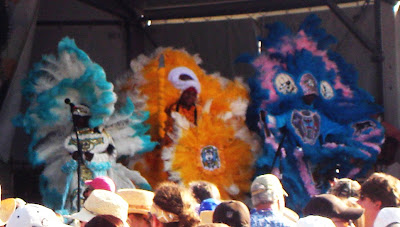 On the way there, we were asked by a fellow in the Mustang next to us in traffic if we had an extra Fest ticket we could sell him. Had to turn him down, and a discussion ensued across the dashed yellow line in Broad Street about how much the ticket prices had gone up over the years. We saw him move up and ask the fellow in the SUV in front of us the same question and observed what we assumed was a similar discussion happening between the two vehicles. I later wished we'd taken the fellow's license plate down or something, 'cause someone was trying to sell a ticket for $30 at the laundromat near where we were dropped off. Oh, well.
We saw a lot of great acts yesterday...took in some of Rebirth, cooled off in the misty Blues tent with mango freezes and a great dose of Keb' Mo', and then we topped it all off with a stay with the Wild Magnolias and Bo Dollis, adjacent to Hana Morris and her entourage, whose spot we watched while they all headed for better bathrooms at the Grandstand (I don't blame 'em one bit for that).

Up to that performance yesterday, I had been debating whether or not I ought to show my friend D all the other parts of New Orleans she was bound to miss if she stuck with the tours and the like. Unlike her husband, who is currently tied to the convention in town, she has some time during the day to traipse around a little more and really see everything. How much should I show her? Would she understand? When I had talked with D and her husband over dinner Saturday night, they said a lot about how little news about New Orleans was coming out of the (mainstream) media to the rest of the country. Seeing the waterlines on the closed Whitney Bank building at the corner of Broad and Canal had gotten them questioning what was really being done recovery-wise in my city. Good.

Would they really get it?

My fears melted away in front of the Wild Magnolias that day.

A member of the tribe was introduced to the crowd. "He's in New York now! We need to get him to come home! It's too cold up there!"

"Hell yes!" I screamed as loud as I could.

"We need to bring him home!"

"Damn right! It's waaay too cold up there!" I screamed again. Members of the Fest clean-up crew nearby smiled and nodded their heads with me.

All of us smiled and nodded together.

I wasn't just talking about the freezing temperatures up north, either. This city is still being frozen out of real, meaningful discussion and action concerning its fate. Its exiles are still longing for the opportunity to come home and to live in the way to which they are accustomed. Money that could be going towards stronger levees and real coastal restoration is headed overseas and valuable sediment is still allowed to flow right into the lake and the gulf. That kind of big chill will permeate national, state, and local politics unless everybody is educated.

And that includes D and her husband.

And, hey, I know that I can do as good a job as these folks in the education department. Hell, with the help of the blogpocheh, I can probably do even better.

It is in this way that something can and will be done...

...and, in the process, something just as valuable as the Indians making a new suit every year will be passed on.

I wish this made me feel better:

The current $50 ticket price brings Jazz Fest in line with other major festivals. The Austin City Limits Festival cost $56 a day, Coachella $89 and Bonnaroo between $52 and $61 (Note: other festivals often require the purchase of a multi-day pass). It’s also only slightly more expensive than a number of shows at the House of Blues during Jazz Fest. Buddy Guy (May 2) and Etta James (April 27) tickets cost $45 or more, and Dr. John tickets cost $33.50—67 percent of the price of a Jazz Fest ticket for two bands (Shannon McNally opens).

Perhaps looking back to the past is not how we should measure the worth of Jazz Fest. Who wouldn’t pay $16.32 to hear many of New Orleans greatest musicians in their prime? The question is what it’s worth to you now.

And a picture in the print version of Offbeat's Jazz Fest Bible taken of the mannequin that is now Ernie K Doe reveals that the poor man needs a serious manicure. Seriously.

Yes the price, as compared to other fests, is reasonable. But when you include the price of food (even a bottle of water), and parking you are looking at something prohibitivaly expensive. Also consider most new orleanians make a weekend of it and you could easliy spend a couple of hundred dollars. For the working class population it's beyond their means. Especially considering everything in New Orleans is expensive these days.

Maybe I'm just bitter because salaries for our fields are too low for the cost of living in New Orleans and even events we would want to come into town to attend are too expensive.

You must take out of town guests on a disaster driving tour. It's your duty as a New Orleanian. If nothing else, they will understand the scope of it all.