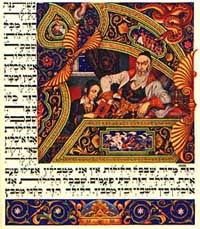 from The Haggadah by Arthur Szyk
Illustration of the Four Questions, the first of which is translated as "Why is this night different from all other nights?"
The pictures haven't been downloaded yet, and the only guy writing anything about it at this moment is Sheckrastos (who is no doubt learning the lyrics to the Mackenzie Brothers' Twelve Days of Christmas - actually, knowing him, he's probably working on living the lyrics...), so I guess I'd better weigh in on my face-to-face adventure with the NOLA blogpocheh before the words get thoroughly overanalyzed, linked to again and again, and made fun of several times over, because those are the kind of wahoos they are, God love 'em.

We walked into Geek Dinner III at Madame Dangerblond's home, heard some strains of James Brown's music coming from within, the little guy said, "Mommy, it's your music!", and immediately made himself at home. I sincerely apologize, Kim, if you are low on your Kentwood water, if you find rocks from your backyard sprinkled liberally thoughout your lovely home, and if the door on your dryer is experiencing fatigue from being opened and closed once too often by an overeager four-year-old. Once he makes himself at home, my son is truly akin to, and happier than, a tornado in a trailer park.

I had the honor of meeting Sophmom, Traveling Mermaid, Sheckrastos and his better and saner half, Dr A., Clay, Cousin Pat from GA, Jeffrey and Menckles, Michael Homan, Oyster, Gentilly Girl, and many others. I explained the joys of Jiffy Pop by a glory hole pilot light and annealer potatoes at 900 degrees Fahrenheit to Mr Clio. I touched base with celcus and his better half on mutual friends. G-Bitch and I shared opinions on what negotiations at the UN would be like if it were entrusted entirely to four-year-olds, and Maitri developed an affinity for my ladies' man of a four-year-old (watch it, honey, my son is dangerous...). I told Editor B about the origins of my first name. I shared some details about my blogging handle with Dr A. And I wished Ashley a little r'fuah shleimah (healing and health) because the big ol' doofus came to the bash sick as a dog, having thoroughly practiced his cough. Ashley, crawl on back into bed, man, and heal thyself.

How good it is for brothers (and sisters) to come together, as it is said in my tradition.

Let's do this again very very soon, y'all, when Passover isn't looming in my near near future.

What most of the NOLA blogpocheh don't entirely realize is that they lived another tenet of my tradition with their gathering last night: if you feed them, they will come.
Posted by Leigh C. at 2:58 PM

It's made out of people?

Hey overeating is naturally N'awlins as well as a huge part of Greek culture.

It was good to meetcha and attach a voice to the lip...I mean face to the prose...uh what the hell do I mean?

Celcus: yep, it's made outta people.

Sheckrastos: Good to meet you, too, finally. Got to do it again soon!