There's been so, so much time spent tapping in to the hive mind that is Twitter for the past few days...it pretty much began with the Haitian earthquake, and was kicked into overdrive by the Saints winning the playoff game against the Cardinals.

Oh, sure, I've been logging in in the evenings when there have been local mayoral forums and the like, but I can sense from the tweets from the last forum about a day ago that both attendees and candidates might be getting tired of the roadshow. Marathon, not a sprint. We all need to breathe sometime.

Speaking of breathing, it seems the Twitter addiction I have will be dying very, very hard. I get up in the morning early, and I check Twitter, even though most of the people I follow are barely awake and, if they are, are tweeting that they are up much too early and should just go back to bed. I come home after dropping off my child and check Twitter. Rehash, repeat, retweet stuff I missed when I was in a car trying to get my child across town. Hashtags can act as more than denoting a subject people can search in order to find related tweets - poignant irony, memorial marking, fan-binding, and softly humorous hashtags can be wielded just as deftly as the most elegant of metaphors. It's amazing what 140 characters can do.

It's warping my fragile little mind.

I guess the craziest Twitter episode of recent days was when I learned about this article through the Gambit's postings on Twitter. I retweeted it, got a response back from a follower asking me if Muses had moved to the Red Stick and concurring with my assessment that Baton Rouge having the best Mardi Gras parade was bogus, and thought no more about that irksome item that got my ire up momentarily.

Until we got my son's first issue of Ranger Rick yesterday, a gift subscription from his grandma.

The little guy opened it up, asked me about the pictures of the nice dog parade inside, where the participants were throwing beads as they were pushing and pulling dogs on small floats, and, thinking I'd caught a glimpse of the Municipal Auditorium in Armstrong Park, I assumed it was the Barkus parade in New Orleans, which the kiddo had never attended. I told him how much fun it was and said we'd have to go together sometime.

My son's new issue of Ranger Rick has an article about a Mardi Gras dog parade...in Baton Rouge. First the Chicago Tribune, now THIS?? 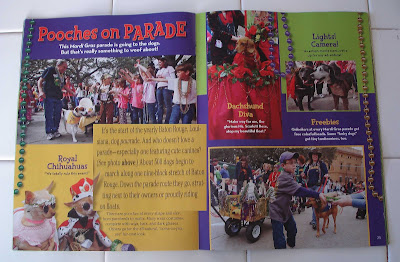 It's enough to make parents such as ourselves - we who live only a block and a half from the parade route and love the ones that come ambling by during the season - completely insane.

@liprap Is the Mardi Gras story a good thing or a bad one? I wrote it, so not sure what you mean by ur Tweet. Libby (RangerRick)

Uh-oh. Must explain to the nice author what I meant.

Watch out on Twitter, kids. The world online is a-shrinking rapidly because of it, so tread carefully and be extra mindful of what your words say. Now more than ever.

Update, 1/22: I could justify my Twitter addiction by saying I am simply tapping into the eternal plumbing of the Internet on a regular basis now - but I'm still a junkie.

I've learned that lesson the hard way after slamming a product. I got a personal phone call from a very upset, entrepreneurial mother.

Glad you stood up for us though!

People in Baton Rouge have an unshakable belief that Baton Rouge in the navel of the Universe.

It's just more BS revolving around the erroneous assumption that Mardi Gras in New Orleans isn't for the kids. The idiotic Family Gras in Jefferson Parish is predicated on that assumption, and now these articles about Red Stick parades in national publications only help cement it. All of it is bogus.