One of the NOLA blogpocheh has already headed out. Another will be going soon. And Hana Morris is a tad chagrined:

In the past month, 3 weeks really, at least 3 important bloggers announced they are moving within the next few weeks. One of my very good friends (a rollergirl) moved to Slidell. My neighbors moved to Prytania St and left the house empty. There is nobody on the other side of my house either. At least one other blogger (my best friend at the moment, I would say) might be forced to move in August. WTF?
What happened to "we will never leave New Orleans"? What happened to all the humorously arrogant criticism of people living north of Georgia?
It feels like the death of blogger community in New Orleans. After Ash died they became my family. I did not keep in touch as much as I should have, true. But now this family is leaving too. Everybody who knew Ash and everything related to Ash is leaving. Maybe it was just a crazy three-year flight of fighting for New Orleans resurrection and now people care more about their personal lives and issues rather then the common effort.

It's time for me to admit that I've been struggling, too.

Yes, I understand the reasons why folks have to leave, and so did Ashley, to a certain extent (have you got a Katrina Pass?), and it kills me, because, despite the population growth here, fact is, corruption in our local government and no real economic development beyond tourism and jobs in the service of tourism is not creating an environment in which people can really stay here and thrive. There are still some major hassles that have to be worked out in order to live here as most other human beings in the industrialized world do, with the added benefits of it being New Orleans, with its great music, culture, and all-over attitude.

These blogging folks I know and love get passes because of obligations greater than the herculean task of trying to mend a city in hurt...as do many folks who are displaced and are finding it difficult to return since 8-29-05. One's family and one's security are paramount. The nationwide economy going down the tubes makes the need to make a living a serious biggie - one we still struggle with, my husband and I, as our residence is here, but his job is not. There are many others like us. Hell, Ashley was one of 'em...and he was a staunch New Orleanian in his Chicago workplace, as I know Maitri and Loki will be in their new places of residence.

But all of this still hurts, dammit, especially since the Big Man's yahrtzeit is coming up next week.

Tough, tough times in what's shaping up to be a tough year, and it ain't even April yet.

My previous post on the closing ceremony of the MR-GO, I realize now, can be seen in another light...

It is a Jewish tradition for a gravesite visitor to place a stone there as a sign of one's tending to the spot, as well as a symbol of tending to the memory of the departed. Just as the rocks being rolled into the man-made channel today will signify the beginning of an end, a rock placed at Ashley's resting place in St. Louis #3 will mark the beginning of the end of a year without this blogging family man warrior for this city full of people that never forget to care, no matter how long and rocky the emotional road is.

The Knife left a mark in our hearts that just can't be erased.

Here's to Ashley Morris, of blessed memory, and to Hana Morris and the kids, warriors all. 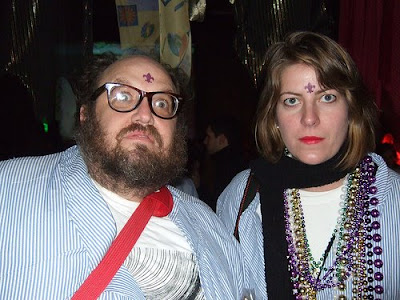 Just a little bit longer, hang on for the arrival of May 2010 and the end of Nagin as we know it - things are bound to get better, anything anyone would be better than this

I think this is one of the problems with the nola blogosphere - it's so clique-ish. Many people in Nola have no intentions to leave, they just don't blog about it. It kinda bugs me that a few people decide to leave temporarily and everyone gets all worked up. What are the rest of us, chopped liver? :-(

My apologies. I didn't mean to offend. And I'm glad many, many other bloggers are still here. This is simply how it's affecting me personally right now...it's a strange time.

Chopped liver is pretty damn good, by the way. A true delicacy these days, when not many people are even offering it much anymore.

Trust Pistolette to say what others may be thinking. :)

Your post is lovely, Leigh, but I agree with P. - there are plenty of us with no intentions of moving. Nothing against those who are/do - it's a personal choice and I wish them all the best. But all the hue & cry seems a bit dramatic.

In rethinking this, I am now realizing, I am still in the hundreds that are still here. Which would put me in the chopped liver category as well...except I feel more like chicken soup with matzah balls.

Ha! I just realized you ARE one of the few people I know who would like chopped liver! :-)

And yes, as I"ve mentioned before, almost everyone I know has come and gone from here many times so I really try not to judge. It's very personal, and never an easy decision given how complicated life can be here.

More specifically though, I think it's important to note that they don't come more hardcore local than Loki and he will probably be working harder for Nola AWAY from home than most people actually do while here. As for Maitri, well, I put family above all else, so I relate to her situation as well. I know they'll be back so I guess I don't see their leaving as really leaving.

True dat. Ambassadors for alla us.

No disrespect to Loki and Maitri at all. They will be wonderful ambassadors, I agree.

However, personally I do think New Orleanians who are persevering and digging their roots in deeper *is* news considering all the negative press we get about how horrible it is here.
That is a positive and deserves mention.

Now, make a good pate with that chopped liver and I'm in!