I look at all the pictures that have been uploaded, pictures that show us in small doses how much the Houma Nation will have to shoulder with regards to their recovery, and I can't think of better places to put my confused energies at this time.

Bagging up the leaves and branches still needs to be done here. I finally managed to do some dishes and some laundry. Took my son to the aquarium earlier today. Had dinner at Jamila's last night with family and friends, and brunch yesterday morn at Slim Goodies', and I didn't mind their truncated menu one bit. There were even a lot of people at our first Shabbat services after the storm, though our executive director had to sleep in the synagogue due to the lack of electricity at his home.

Things are so...normal. And yet not.

Our decision to evacuate came a day before a mandatory order to do so came down from city officials (and left a message on our voice mail, by which time we were already making our way towards Oklahoma from Texas). We zigzagged our way through Louisiana and Mississippi, then Louisiana again before settling in a hotel east of Dallas late Saturday night. Along the way, my son was biting into an apple while we were tooling along on I-12 and informed me he'd lost a tooth - his first. I called up my mother, in part because I was freaking out at what I thought was a bit too early of a milestone for the little guy to have. When I told her we'd told him he needed to take better care of his teeth, she chided us half-jokingly;"You are some mean parents!" The tooth fairy left him a Sacajawea dollar for his bottom front tooth under my mom's pillow at their house in Oklahoma City.

We pulled into Natchitoches, Louisiana, for a short break after a beautiful drive down highway 84 and found ourselves at the banks of the Cane River taking in the last night of the Zydeco Festival, which was going on until midnight. The little guy ran around with a girl he'd just met as our dog sniffed the grass and we listened to Leroy Chavis and his band rocking the downtown. We ate at a restaurant that had two different programs on each of its televisions: one was the Illinois-Missouri football game, and the other was nonstop coverage of around-the-state prep for Hurricane Gustav. Back into the car, where we tried to get a room in a La Quinta in Longview, Texas, only to be turned away after the guy standing just in front of my husband in line and chatting amiably with the desk clerk for twenty-damn-minutes took the last room. We found another room in a hotel further down the road, where we spied an Entergy truck from New Orleans in the parking lot.

Oklahoma always weirds me out, but I seemed to search for even more faults with the state and with my parents' new city of residence this trip. Oh, the novelty of passing the Oklahoma Horseshoeing School (South Campus!). The strangeness of a) having the Boy Scouts of America sponsor a Kid's Meal at the Braun's chain of restaurants and dairy stores and b) having my son find a small emergency flashlight in his kids' meal. The sheer hilarity of having boosterist billboards along the highway proclaiming messages such as OKLAHOMA: The parking meter was invented in our Great State. The fault-finding was largely unwarranted: my family and the state were good to us.

I was searching for something off, however, because things were already off and I couldn't take the time to really settle and see that. Between having to shuttle around with family, be mom and wife, keep tabs on our dog, who came with us and had to be eased into life with my parent's yellow Labrador, and doing some checking on storm progress but not too much, I didn't have too many moments to process that, yes, we were fine, but our home might not be. People we knew, good friends who were scattered about the southeast or who stayed to weather the winds and rain, good people who were also doing their thing - we were all in limbo, hurrying up to wait on a force of nature that, depending on circumstances beyond our control, could pass us by or wreak some serious havoc.

Uneasy times, punctuated by moments that were akin to pretty much any other family vacation we've ever had.

Tackiness was encountered at establishments such as Oklahoma City's Science Museum, where we gave the girl at the desk our zip code and she informed us that, of the six families from New Orleans that had come through the museum, we were the only ones that had not asked for an evacuee discount. There were moments when my toothless wonder of a son would run up to people and instantly lay out a five-year-old's version of the events of the past few days and we'd cringe a little. Overall, we were having a good time, but there was also the feeling that it was somewhat stolen from somewhere, some way.

Right now, though, I want to give back some of that good feeling to these parishes, people and places that were hit hardest by this. Because life will always make us feel off-balance at some times more than others. And because we need to grab hold of these times when we can do something to get those who have fallen waaaay off balance back on again.

It is why I take great joy in encountering the incongruous in unexpected times and places: 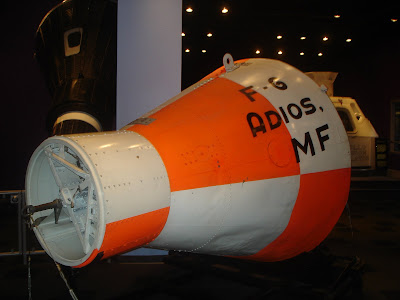 Oh, these little vignettes, these windows of possibility that show us, all at the same time, how sacred and profane we can be. How much we can soar while both feet are firmly planted on the ground.

How much we can truly help others when we want to, and we have it in our power to do so.
Posted by Leigh C. at 10:27 PM

Good to see you made it out in once piece, too.