Aaack! My husband is out of town. He had to leave on Mardi Gras for Gulfport to take a flight to D.C. on business. Typical. At least he left after nearly everybody visiting got pancaked. (It turns out, according to NOLA Cleophatra, that Mardi Gras is also the perfect time for other pancake hijinks. Hey, we had no clue. We just like pancakes. Next year: a gray brick road pancake race!)

Why am I aaacking, then? 'Cause he's the only one who knows how to download pictures off my son's Fisher-Price digital camera, and he refuses to explain to me how to do it until he gets back from his trip. Grrrrrrrr....

So pictures will have to appear at a later time. Sorry. 8-(

Anyhow, our first big Krewe of Pancakes and Syrup gathering came off quite well. We pulled in our pal Justin, his wife, Justine, and their pals, who toted mimosa ingredients with 'em. Edie came first and had to advise Justine via cell phone what the house number was, since she didn't recognize the house - she hadn't seen it since before it was repainted. Dan's klezmer triomates came next, bringing two friends each, along with some Nutella and some mixed nuts, not to mention a little extra champagne for mimosas. Everybody dug into the three king cakes there to start, two of which were my homemade ones and one was a chocolate cream cheese from Winn-Dixie. I knew it was Clay's birthday, and I almost did a multicolor sprinkle job on one of the king cakes, but I opted for a black and gold on one instead; the other was traditional purple, green, and gold.

Just as I was starting in on the second pancake batch, Sheckrastos and Dr A dropped in with some pecan bread pudding, a few bottles of Mardi Gras Bock, and some marvelous meatballs. By then, people were starting to venture out onto the parade route and calling in to our phones to let us know that Zulu had arrived. I walked the dog shortly before 7 AM and observed that our bead-eating tree spot was, once again, part of a roped-off area that nearly blocked off the entire sidewalk in front of the bank. Once again, I was happy to stay in and flip some flapjacks. Next year when I encounter that kind of stuff, I'm gonna play parade territory terrorist and bring a box cutter with me. HEY! Great costume idea!!!!! Then again, maybe not...

A little afterwards, the Oyster clan came through, helping us take a big bite out of the third batch of pancakes. Lovely let us know how obsessive Obamoyster can get about overanalyzing the facial expressions of the presidential candidates in mid-debate, constantly rewinding videotape to capture the nuances of each raised eyebrow, each subtle twitch of the corners of one's mouth, each tilt of the head. Pearlgirl did her best to capture this sort of subtlety with the little guy's digital camera, playing pancake party paparazzi to the hilt. That's the other reason why I want to download the pictures, 'cause she took some good ones! Grrrrrr.....

At one point, Edie came running back to the house, adamant that she had to have a hamburger, right that second!!!! The smells coming from all the curbside barbecues, fried chicken trucks, and carny corndog stands had her craving some junk food. Dr A's meatballs to the rescue!!!. Edie slathered some Blue Plate mayo on some hamburger buns, stuck some heated-up meatballs between 'em, and satisfied her junk food hunger for a bit. The other reason why she came back was that things were getting testy around the roped-off area in front of the bank. Some folks were getting seriously ticked off at how little was left of the sidewalk and were making something of it. I grabbed my first beer of the day after that.

Shortly after the Oysters left and Shecky and Dr A headed out for a bit, Celcus and Cleo came by, and we talked of all sorts of matters. A drumming sounded in the distance, and we peered out the front windows as a large samba band and its marchers drummed their way down the gray brick road. I kicked at the windows, ticked that I couldn't open the damn things - they were still painted shut. While they were there, a friend of one of the klezmer trio mates came back, elated that he'd received a Zulu coconut, and he hadn't had to pay for it like he'd paid for one at a synagogue auction the year before.

The rest of the day was spent cleaning up some, hanging with the little guy, greeting Shecky and Dr A as they walked in with cans of Miller Li...uhhh...Rodeo Lawyer beer, a sure-fire sign they'd been to see Jeffrey and Menckles at their spot (I should have handed those two the tallboy six-pack of the RLB I'd gotten just for them when I saw 'em on Saturday. Oh, well...). They rested their legs and tactfully watched Cars with the little guy (He did what in his cup??!?!??) while Shecky speculated what car love would be like (just...use your imaginations, y'all. Eccch.).

I had seen earlier in the day by way of the Net that Mike Huckabee had taken a state. I flipped the TV over to a network showing mostly Republican primary results, and it projected a win for McCain in Missouri. I switched over to the Rex ball on the local PBS station in time to see the highlight of the whole thing - the Marine Corps Reserve Band doing a stylin' drumline thing. How did I know it was the highlight? The band went into the "Star-Spangled Banner" shortly afterwards, and the scene switched to all the society broads standing in their finest. One of them couldn't conceal her yawn - and the king and queen of Rex hadn't arrived yet!

Dan had called earlier. He'd made it to D.C., and he ran into a family on the Metro that was headed for a Mardi Gras celebration somewhere outside the Beltway. He immediately handed over most of the big bag of beads he'd brought with him to the family, who were elated. It turned out they came from New Orleans originally. If he'd had an extra king cake with him, I know he'd have given them that, too - but he had to bring something to the conference.

I just wish he'd been able to stay here for the whole day.

Oh, well. I now need to dig up the Fisher-Price digital camera manual. Got to get those pictures up!!!! 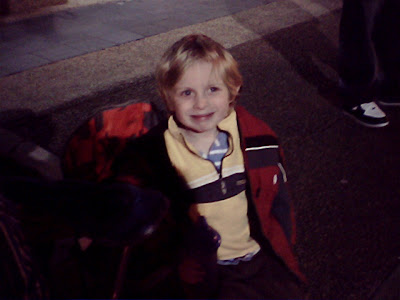 The little guy in a rare state of repose. He spent nearly every parade moseying around back by the bank ATM, schmoozing with any and all other kids hanging out nearby and picking up broken strands of beads and swinging them around to make arcs that looked similar to this. He really doesn't care about getting parade swag. Not one bit. (sigh) I was, however, heartened to see him chase down a Tucks football that bounced into his territory on Saturday.

What follows are Friday night parade shots of Hermes and Krewe D'Etat floats.: 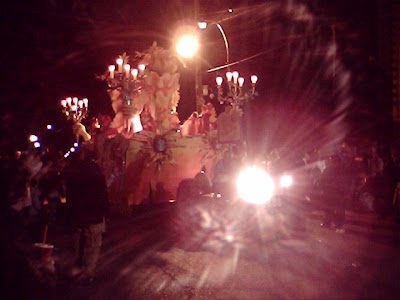 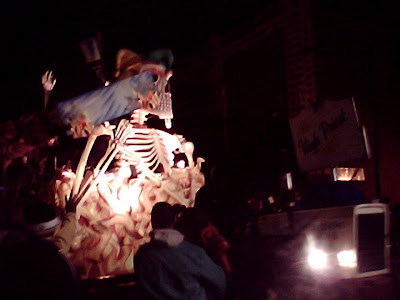 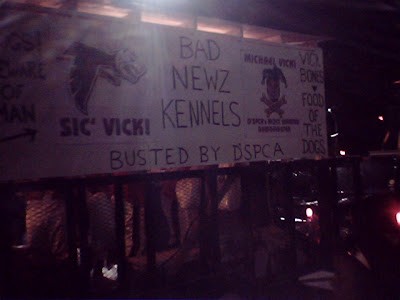 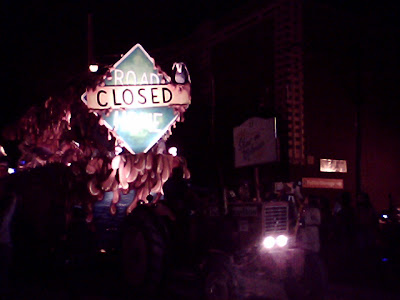 Pearlgirl's pics in another post. Soon, very soon! 'Til then: 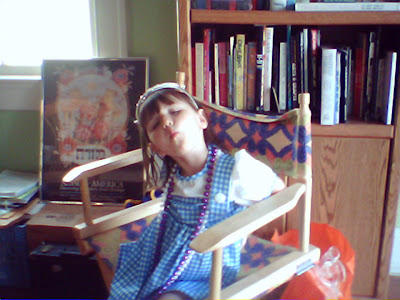 Sounds like your krewe of pancakes was quite the success!! Sorry I missed it.

Okay, the thing that cracked me up?
"Why am I aaacking, then? 'Cause he's the only one who knows how to download pictures off my son's Fisher-Price digital camera, and he refuses to explain to me how to do it until he gets back from his trip. Grrrrrrrr...."
So easy a child could use it, right? (snicker) Sorry. I just can't help myself.

Well, I finally DID figure it out. Scary thing is, my son might have been able to figure it out a tad faster than Mom! God, I'm getting old.

Good to hear from you, madame! Hope things are going well in your place and time. Howdy to the kids!